I just found a great story on the Western Standard site in which Edmonton writer Ric Dolphin tells a fascinating first-person story about a sure-fire business he started last year.

“To Prince George and back” tell 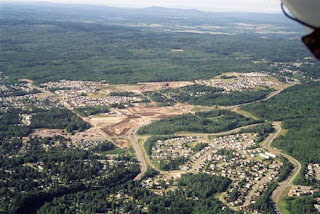 s how Ric and a partner opened up a “higher-end consignment store” for furniture, art and antiques in the boomtown of Prince George (pop. 80,000) , in the B.C. interior.

The story recounts the reasons he thought it would work, and all his startup hassles. I’ve worked with Ric before, and it’s all written in his vigorous, personal style that’s a treat to read.

Check the story out here.

Like many entrepreneurs, however, Ric misread his market. Here’s how it ends:

"As summer turned to fall and then winter, as the effluent from Canfor turned into a crystalline fog that hung over the downtown bowl like a toxic Slurpee, and as my store at 15th and Central struggled, these pessimistic realizations scared away the bluebirds of an earlier time. Customers liked the store--if I had a dollar for every time I heard the phrase, "Just what Prince George needed," I'd be rich--but there weren't enough of them. Despite a visible location on a busy commercial avenue; despite radio, newspaper and mail-out advertising; despite positive word of mouth, our sales remained flat and profit elusive. Moreover, the supply of consignment items, which was to be the backbone of the business, was of insufficient quality or quantity. After six months, my partner--the guy with the money--decided to cut his losses and Nicestuff Quality Consignment closed its doors.

"Faced with unemployment and indulging in what the shrinks would call transference, I began reciting the cruel jokes about poor old P.G. and blamed the ball-cap-wearing, pickup-driving Value Village addicts who wouldn't know quality or beauty if it bit them in their baggy-assed jeans. One tries to raise the tenor of their miserable little lives . . . et cetera. …

"So, enough transference. The store didn't work because Prince George is not a large enough market for such specialized trade. We feared this might be the case and were proven correct. Despite the smell, I rather liked Prince George. The surrounding mountains, forests and lakes are beautiful, the winter isn't quite as harsh as Edmonton's and the populace is friendlier. Unfortunately, I don't think the city has much of a future. But then I have sometimes been known to be wrong."