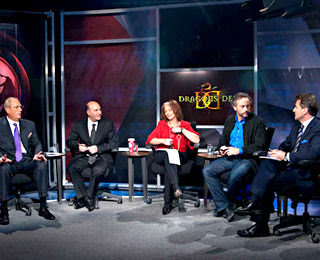 ating the economy. I must admit that when I first heard about it, I thought this was just too goofy: having entertainment-geared personalities like the Dragons play out their roles on “The National” seemed to make as much sense as inviting Brent Butt to discuss gasoline prices.

Yet, it worked. The CBC got a bunch of earnest people together to pitch the Dragons on their ideas for economic stimulus: investing in infrastructure, for instance, or green technology, or higher education, or the auto industry. Each Dragon was given an imaginary $4 billion to invest wherever he or she chose.
Yes, we had the painful arguing-over-top-of-each-other scenes that may be appropriate when discussing an entrepreneur with a bright blue mousetrap, but seems undignified when talking about the future of the nation. But at the end, we got a good discussion of issues and possibilities. And yes, Kevin O’Leary proposing to invest his $4 billion in eliminating corporate income tax and capital gains tax entirely.
Most of the Dragons went for a more modest approach: investing in IT research, infrastructure and green technology. Which makes a lot of sense to me – I think green tech is going to be the next Internet, a game-changing revolution that will create incredible entrepreneurial opportunities while sweeping away many old habits, behaviours, technologies and ways of life. Green is the way to go.
(The Dragons also reserved a few billion for investing in small and medium-sized business: investing in Canadian entrepreneurs. I would take that further and say, let’s also invest in entrepreneur education: so more Canadians can learn to take responsibility for their futures and create economic value on their own.)

The best part of the show was seeing the Dragons face down the CAW’s Buzz Hargrove at the end. They accepted his argument that other countries’ export restrictions have hurt the North American industry, but they swatted away his claims for the auto sector as a high-tech industry of the future. Time to move on, they said, and once again I think they're right.
You can read about the show and watch portions of it here.
Bonus: Here is Kevin O’Leary’s advice to Buzz Hargrove:
“It’s very, very difficult to watch the sun set when you know there’s nothing you can do about it. I gave no dollars to [your] idea. We have a great system in this country- capitalism provides for bankruptcy, and from the ashes of the dead comes the heartbeat of new life, and you’re not letting that happen. Your patient’s dying, and you’re keeping it alive on a slow-drip program, and I hate to see that torture. Pull those tubes out and let that grandmother die – it’s time.”
Posted by Rick Spence at 9:21 AM

Kevin O'Leary, as usual, says the truth.
I also agree with his plan to spend billions over the other Dragons' suggestions as at least once a wekk I hear from a manufacturer pulling the plug on their Canadian operation because their Chinese plant does not have taxes.
These owners do not want to close their Canadian companies but how on earth can they compete?
Thanks for Kevin's lines to Buzz - he says the hardest things face-to-face and I admire that greatly as most people are polite but do not get the truth spoken.

I agree with your comment about educating small business. They often don't know what they don't know.