At the dawn of the personal-computer revolution, Steve Jobs was there. 30 years later, when the computer finally became an everyday accessory( iPods, iPads), he was still there, only now he was leading the revolution.

In the 1980s and 1990s, when success was about flooding the world with confusing, proprietary systems, Bill Gates was the icon of the computer industry and of entrepreneurship. In the 2000s, this leadership passed to Steve Jobs. His vision of personal computer systems that served people – rather than the other way around – won out. And it created love, joy and unsurpassed loyalty.

Visionary, uncompromising, a born communicator, and a detail-oriented product manager who demanded the very best in his products and systems, Steve Jobs represented entrepreneurship at its best.

Those who would follow in his footsteps must insist on the best user interface, the coolest designs, an obsession with customer needs – and the never-ending need to “Think Different.”

And one more thing - a flair for drama never hurts.

Rest in Peace, Steve. You made a difference. 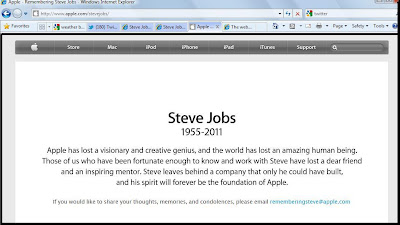