After attending a reception last night celebrating PostMedia’s acquisition of Sprouter – the advice service for startups – I walked through the camp of Occupy Toronto in nearby St. James Park. It was crowded, but eerily quiet for 9:30 pm.

Easily 100 tents, mostly sturdy and new, and well protected from the rain; signs everywhere denouncing banks, Stephen Harper and the IMF; a few guitar-playing troubadours hanging out by the old bandstand. There are a few large tents in which you can stand up, but most are small pup tents, meant only for crouching or lying down. There is electricity in the park, but inside the tents are dark, and cold, and I admired that people would willingly live like this. 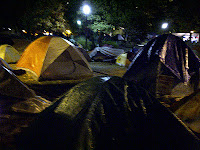 But what are they protesting? I hung out at one sort of community discussion, where about 30 people snuggled in and around a canopied dining area to discuss “issues.” I heard complaints about colonialism, the exploitation of Canada’s indigenous peoples, Britain’s campaign in the 19th century against the Irish (“And the Scots,” added one observer, in a Monty Python-esque aside), the failures of capitalism, its roots in slavery (?!), the difficulty of finding jobs, the commercialization of culture. The discourse was conducted collegially, but somewhat haughtily (no one dared to question the contention that capitalism is rooted in slavery).
Everyone oozed concern, worry and disapproval of the current system. But I sensed no optimism. “We Will Overcome” was the anthem of protest and civil rights in the 1960s. Today’s message seems to be “We will Occupy,” as if they have no idea what victory would like. But then, when you can't clearly articulate the issues, how can you hope to find a solution? 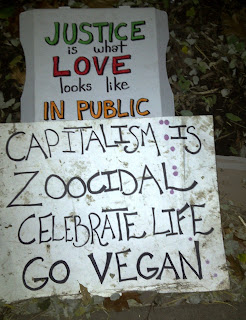 The current economic system isn't perfect. There are inequities. Greedy people at the top take too much and/or neglect the people that our economy is supposed to serve. But how much worse are they than the labour leaders who extort cash from struggling companies and governments, or the politicians who spend money no one has in pursuit of partisan projects?

Solutions will not come from there.
At the Sprouter party, I talked to a 22-year-old entrepreneur who with little experience and almost no money has raised funds from private investors to launch an apps business that will launch next week. She has worked diligently, with her partners, for no pay, for nine months to research the market and develop a product. They have sacrificed much, because they believe their product will add value to people’s lives and that their hard work – which is still just beginning – is an investment that will pay them back many times over.
Capitalism works. It enables people to innovate – to follow whatever dreams and instincts they may have and even indulge themselves, if they wish – and to get paid only if and when their work creates value for others.
It’s a discipline that may seem harsh to those who can't find (or don't observe) that value proposition. But it’s an opportunity that is more equitable and universal than any other. It doesn't discriminate between the rich and poor, young or old, good or bad, but between those who are willing to work hard and find new ways to serve others.
At the Entrepreneur of the Year Awards the previous night, Ernst & Young paid tribute to Greg Overholt, a creative young social entrepreneur whose non-profit organization SOS (Students Offering Support) harnesses volunteer tutors at universities to raise money to build sustainable educational projects in the developing world. He’s not a conventional business person, but Bay Street bigwigs and entrepreneurs alike celebrated Overholt’s vision and enterprise. Business does care, and its sensitivities to societal problems are becoming more acute. And its solutions are usually more equitable and efficient than those dreamed up by bureaucrats.
There are many problems in society. But there are even more solutions, waiting to be discovered. While I admire the passion and courage of the Occupy movement, I don't know how many solutions will be found in their general disapproval of everything – and their belief that relief will come from anything but individual effort by small groups of disciplined, narrowly focussed problem-solvers. That’s how things get done. 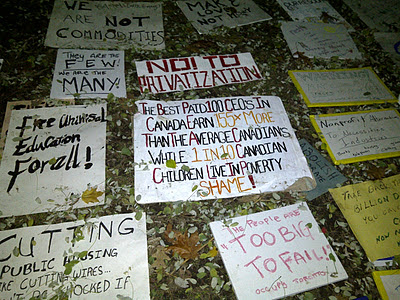 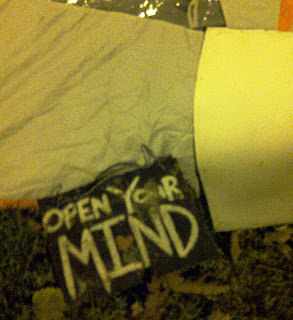 The "occupy" movement resembles the early British punk scene, which was interested in tearing the current system down instead of innovating a new one.

It is easy to set up a Facebook page, blog or live in a tent "protesting," but as you highlighted in your article, their are true social entrepreneurs who stopped talking and started acting. Those are the individuals to which we should listen as they are actually creating the future instead of whining about the present.

Thankyou Rick for eloquently stating that people should starting thinking that the core right that people have is "the right to take things into their own hands and work hard to make things happen. This is in dark contrast to the sense of entitlement that a lot of people in our society today have that makes them take the stance that they are hopeless with out a hand out from grovernment or some corporate entity.

I'm pretty sure capitalism is not perfect. But it gives us fairer and more robust tools and pathways for self-development, empowerment, creativity and financial security than any other system I've seen.

Hi Rick:
you make some good points. I would add a good line that I read from an author named Michael Lewitt who wrote in his book The End of Capital..."a growing percentage of the citizenry is coming to believe that a system that privatizes profits and socializes losses lacks legitimacy". The Occupy folks would probably not express it that way...... but it still comes out the same... much as I agree with you that capitalism is the best system ever invented for creating wealth, and rewarding those that do.......something went off the tracks on that value proposition in 2008 and has NOT been fixed. greig