Shimon Peres: “Our dreams that seemed so big at the time now seem small.” 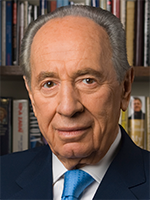 I attended an inspiring presentation in Toronto today by Shimon Peres, former prime minister and former president of Israel. A Nobel Peace Prize winner for his role in the Oslo Accord, burying the hatchet (at the time) with Yasser Arafat and the Palestinians, Peres started out as a political hawk in Israel and came to realize that peace and security could be reached only through trust and compromise.

Interviewed on stage at the Fairmont Royal York by Al Jazeera America anchor David Shuster, Peres offered his thoughts on current developments in the Middle East, his legacy, the role of the U.S., and the future of peace.

·    On the current negotiations with Iran: “I believe for the sake of our children, all of us, Iran should not become a nuclear power."

·    Concerning the U.S. role in the bombing of ISIL forces in Syria and Iraq, Peres was asked whether the United States should take more aggressive military action. “They spent a lot of money in Afghanistan, and it cost a lot of lives. The results are not so brilliant.” He suggested it would be better if the well-funded Arab League took on the fight against ISIS, on behalf of the United Nations.

·    On the source of the ongoing conflict in the Middle East: “The reason for terrorism is poverty, ignorance, and historic mistakes.  The Western powers carved up the Middle East for their own convenience.  They didn’t pay attention to the local people, so they constituted nations that were not coherent … Once the empires lost control, those countries went back to what they were in the beginning. They didn’t find a unifying role.”
·    On the future of political division in the Middle East: “I think the older generation is a lost generation. But millions of young Arabs feel differently. Forty million of them have cell phones. We have to help them. It is a new age, and they will be the future.”

·    Regarding the Palestinian/ Israel standoff: “We need two states, Palestine and Israel, living in peace, respect and cooperation.” As a model he pointed to Canada, which has survived its own language and culture divide for more than 100 years.

“All of us want to recognize a Palestinian State.  It will be better for all of us.  It’s in our interest to find a solution.. And it may happen earlier than many people think.”

·    When asked what he sees as his legacy, or how he would like to be remembered, Peres said this: “The past is past. I’m not interested in it anymore. I devote all my attention to what will happen tomorrow.”

Peres now supports those who strive toward a better world: “I think we should all fall in love with dreams rather than memories.”

He volunteered that he now recognizes a mistake he made years ago: “Our dreams that seemed so big at the time now seem small.”

Watch:  U2 sings 'One' in tribute to Shimon Peres. In Toronto concert, July 7.
(If you're pressed for time, go to the 17-minute mark).