Tesla: What makes a great entrepreneur?

It's a fascinating but tough read, with more science in one book than I've seen since Grade 12 Physics (which I only survived because I had a smart mentor, my friend Jeff who is now a professor of astronomy at LSU).

Of course, I'm reading this book for the entrepreneurship bits, which is where the story comes alive. I was especially taken by Tesla's encounter with Westinghouse, the fledgling manufacturing company that went on (thanks to him) to become a powerhouse in, well, electrical power.

Tesla sold a number of patents to Westinghouse, which made him a partner of the company and its founder, the inimitable George Westinghouse. He was pretty accomplished himself, filing his first patent at age 19, for a rotary steam engine. At 22 Westinghouse invented the first air-braking systems for trains, variations of which are still used today on trains and heavy trucks.

Where Tesla was a brilliant, conflicted scientist, Westinghouse was the complete entrepreneur, a focused founder and disciplined business leader. The company he founded still exists (it's now called CBS, named for the broadcasting firm acquired by Westinghouse in 1995), and the brand name lives on through licensing deals with other companies.

What characteristics produce a great entrepreneur? You'll see most of them in this description by the legendary Nikola Tesla: 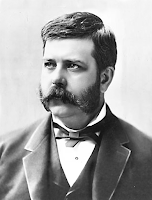 "I like to think of George Westinghouse, as he appeared to me in 1888.... A powerful frame, well proportioned with every joint in working order, an eye as clear as a crystal, a quick and springy step – he presented a rare example of health and strength. Like a lion in a forest he breathed deep and with delight the smoky air of his factories. Though just forty then he still had the enthusiasm of youth. Always smiling, affable and polite, he stood in marked contrast to the rough and ready men I met. Not one word which would have been objectionable, not a gesture which might have offended....

"And yet no fiercer adversary than Westinghouse could have been found when he was crossed. An athlete in ordinary life, he was transformed into a giant when confronted with difficulties which seemed insurmountable. He enjoyed the struggle and never lost confidence. When others would give up in despair, he triumphed. Had he been transferred to another planet with everything against him, he would have worked out his salvation."

Tesla's assessment of Westinghouse's physical attributes wouldn't pass muster today. But his colorful depictions of the man's passion, energy, strength and resilience go a long way in describing what it takes to win at business in the 21st century.