"If you want something, why not ask for it? What's the downside? All they can say is NO." 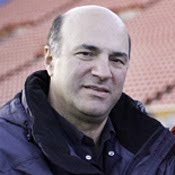 CBC Dragon, business pundit and one-time software entrepreneur Kevin O'Leary (as quoted in an interview in the October issue of PROFIT Magazine. He was asked how he became so entrepreneurial at a young age).
O'Leary continued:
"I learned early on, if there's something I want, I'm prepared to ask again and again, and try to find the path to getting it. That's also, I think, what defines an entrepreneur. You set a goal, you may not succeed the first time, but you keep trying."
Click here to read the full PROFIT interview with Kevin O'Leary.
Posted by Rick Spence at 1:31 PM