Maybe it’s all the work I’ve done this year with so many dynamic Quebec entrepreneurs in planning the recent Visa Small Business Big Thinking conference in Montreal, but I’m totally bullish on the business energies coming out of Quebec.

Once the economic powerhouse of Canada, the Quebec economy seems to have been in consistent decline ( 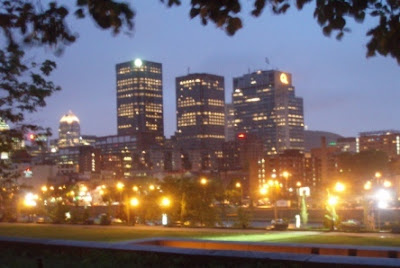 relative to Ontario and the West, anyway) since the election of the first PQ government in 1976 – which sparked the “chicken run” that saw so many anglo businesses and individuals head down the road to Toronto.

But that's all changing now. A new story in Canadian Business magazine looks at several reasons why Quebec is in good shape to compete and win in the 21st century.

Jeff Sanford writes, “It has long been a given that Ontario is the economic centre of the country, challenged only by Alberta in terms of financial might. The eastern areas are, it is usually assumed, economic backwaters destined to forever trail the other areas of the country in growth.

“But is this really true? I traveled to Montreal this May to interview Real Raymond, the outgoing CEO of National Bank Financial, and took some time to wander the streets, which were packed with folks hitting the patios to throw off the winter blues... But what was most interesting was the notion I came away with — that the Quebec economy may be set to buck stereotypes about its economic destiny."

Among the positive signs Sanford sees:
* Like many regional banks in the US, Montreal-based National Bank is on a roll;

* The Montreal Exchange’s focus on financial derivatives is helping position Quebec as an international thought leader in specialty finance;

* “Everyone talks about the strength Alberta has in the energy sector, but few realize Quebec is similarly well-situated to step up as a regional energy superpower as a result of its massive James Bay hydro projects. These are going to be hugely valuable in the new post-easy-oil, carbon-constrained economy that seems to be emerging.”

* Quebec's water assets. Canada has roughly 40% of the world's fresh water, and Quebec has 40% of that. "Considering the shortages of water that are looming around the world as a result of rising demand and new rainfall patterns from global warming, water may end up a more valuable commodity than energy. The future looks good for la belle province.”

Sacre bleu! Read the whole story here.
Posted by Rick Spence at 12:39 AM