Betty Fox and Romeo Dallaire carrying the five-ring flag was pretty exciting for any fan of Canadian culture and history. And Bryan Adams and Nelly Furtado?

But the highlight for me was that the organizers found a place in this primarily visual spectacle for the spoken word. They made a hero of a bespectacled "slam poet" 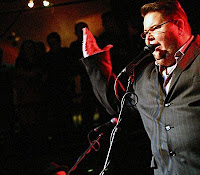 from Yellowknife named Shane Koyczan, whose poem "We Are More" summed up Canada and the Canadian spirit better than any other single moment of the $30-million opening event.

Kudos to the organizers for a brave move. Based on the Internet chatter I have read today, it was a popular choice.

Commissioned by the Canadian Tourism Commission, "We Are More" talks about the people and promise of Canada. It contains some wonderfully evocative images:

* We are an experiment going right for a change

* we reforest what we clear
because we believe in generations beyond our own.

Beautiful, beautiful stuff. Poetry for the people - what a concept.

Click here for a Youtube video of Shane reciting his poem on Vancouver's waterfront. But he was better last night. If I find a video, I'll post it here.
Posted by Rick Spence at 5:12 PM

I loved the opening ceremonies too.

I found them celebratory in a serene and powerful way.

For me, the highlights were the acrobatic ballet for Clouds and kd Lang's singing of Halleluiah. My daughter loved the badass fiddlers. We Canadians don't realize how much of a novel concept hard fiddling is beyond our borders.

Thanks for the link to Shane's poem.