"The best executive is the one who has sense enough to pick good men to do what he wants done, and self-restraint enough to keep from meddling with them while they do it." 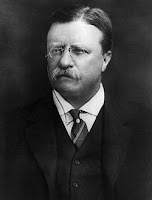 These words should hang on the office wall of every entrepreneur. Only by delegating to good people, and by supporting them rather than micro-managing them, can you grow your company to its fullest potential.

Roosevelt was an author, naval historian and cavalry officer, New York City police commissioner, governor of New York State, conservationist and trust-buster. Yet he was only 42 when he took over as President, following the assassination of William McKinley in 1901. (You can visit the room where he took the Oath of Office in Buffalo, NY, just two miles from Canada.)

Roosevelt died at the age of 60, due to complications arising from an earlier case of malaria.
Posted by Rick Spence at 4:39 PM

Absolutely true. I have written those words on a card and pinned them to my office noticeboard!