“War is simple. Decide what will hurt the enemy most within the limits of your capabilities to harm him and do it. TAKE CALCULATED RISKS. That is quite different from being rash. My personal belief is that if you have a 50% chance, take it.” 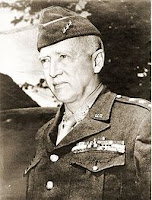 General George S. Patton, 1885-1945, in a letter to his son George Patton III, written from England on June 6, 1944
Patton was known as the most aggressive of America's generals in World War II. He was also one of the most successful.
Posted by Rick Spence at 2:29 PM