It's that time of year again, when politicians and big business make a fuss about entrepreneurs and say good things about how we are the backbone of the commnituy, the economic engine of Canada, and so on and so forth. 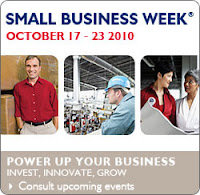 Hey, it's better than a kick in the teeth.

From Oct. 17 to 23, Canadians will be celebrating Small Business Week, and entrepreneurs will be attending numerous events designed to educate and motivate them for greater performance.

As you may know, SBW is a creation of the government – the Business Development Bank of Canada, to be precise. Together with national and local sponsors, the BDC names a group of outstanding young entrepreneurs from each province, and holds events across the country dedicated to helping businesses grow. The BDC selects a new theme each year, and this year the theme is “Power Up Your Business. Invest. Innovate. Grow.”

(They mean well. But they do need a new copywriter.)

The best part of SBW is meeting with other entrepreneurs and learning new growth tactics at special conferences, awards programs and networking events across the country. Click here to learn about local events near you.

Someone the other day asked what special activities I had planned for Small Business Week. I just told them that at Canadian Entrepreneur, “Every week is Small Business week.”
Posted by Rick Spence at 10:44 AM 1 comment: 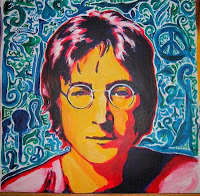 The books that fell off my bookshelf into my hands most recently were coincidentally of a type. One is a tattered copy of Lincoln’s Generals, by T. Harry Williams (1953), which I picked up free at the end of a garage sale, and the other is Sir Basil Liddel Hart’s History of the Second Word War (1970), which I've had around the house for at least 20 years.

In Hawaii last summer we visited Pearl Harbor, where I realized  how little I know about the war in the Pacific. So when I returned home I read Liddell hart's chapters “Japan’s Tide of Conquest” and (138 pages later), "The Tide Turns in the Pacific."  I enjoyed both so much that I went back to the start and began reading the whole way through. I'm now safely into 1943 and enjoying the book much more – the early years of the war are heartbreaking for the Allied side.
What you learn from studying the Union generals in the Civil War, or the various commanders in WWII, is how often leaders blunder. No one knows why the Japanese failed to destroy the shipbuilding resources and fuel storage tanks of Pearl Harbour; that could have significantly delayed the U.S. Navy's remarkable comeback.
Hitler himself, whose mad hatreds won so many early victories (to the endless surprise of his generals) saved the Allied cause several times: by not annihilating the British Expeditionary Force as it retreated from France, through Dunkirk, in 1940; and again by turning on the Soviet Union in 1941 before he had pacified his western front.
The Allies themselves made mistake after costly mistake. After the Belgians failed to blow up a few key bridges, the numerically superior French armies panicked at the Nazi tank columns invading from the north (instead of dashing themselves to pieces on the Maginot line). The Brits moved a weak force into Greece that only served to attract the Nazis' wrath. In Crete, the New Zealanders ceded the airport to a smaller attacking force and failed to counterattack while they had the manpower advantage – dooming them to defeat and capture.
Several times the British failed to chase Rommel out of Africa when they had the chance. And by building up their defences in Egypt, the Brits doomed Singapore, a more strategic asset.
Even more fundamentally, prior to Pearl Harbor the Americans and British cut off Japan’s oil supplies, but they didn't adequately prepare for the Pacific war that they should have known would follow.

In the Civil War, the North had a huge advantage in manpower, armaments and manufacturing muscle. Yet the generals of the Union Army were timid. Time after time, Gen. George McClelland (facing Lincoln in photo at right) and his ilk failed to move against the Confederates when victory seemed possible; the generals constantly overestimated the size of their opposition, and were always waiting for more supplies, more certainty.
Even after Gettysburg, as Lee’s beaten army was fleeing south towards the safety of Virginia, the Union army failed to chase the Rebels and create a rout that could have ended the war two years early. Only U.S. Grant, fighting on the Mississippi front, harried his foes consistently, using whatever resources he had and never whining for more.
For years, Lincoln told his generals that the strategic objective was the destruction of Lee’s army. He despaired at how often his generals forgot that objective. Instead they would bring him plans for seizing this city or that bit of territory, while avoiding a major battle. They couldn't understand that the war would not end until Lee could no longer threaten them.
Of course, it’s easy to criticize the decision-makers after the fact, long after “the fog of war” has lifted. But it is astounding to see how often bad decisions are made in the heat of battle. It’s a useful reminder why bold initiatives often succeed in times of confusion and uncertainty.
Which should be very encouraging to entrepreneurs assailing established markets.  If you can sow confusion and discord with a sudden frontal attack on a market, it is very likely that your bigger opponents will make mistakes in reaction – giving you a chance to consolidate your early gains and win a victory.

Read up sometime on the battle for Tunis, and how German general Walther Nehring and his outnumbered defenders outwitted, outhustled and outbluffed a huge Allied attacking force, thus prolonging the war in Africa by a full six months. Speed, flexibility, courage and yes, desperation, can work wonders against confused opponents who don't have a clear idea how to win.
There seems to be a lot of those people out there.
Above: Gen. Walther Nehring (at right) with Rommel (in cool peaked cap).
Posted by Rick Spence at 10:57 PM 2 comments:

I blogged recently on PROFITguide.com about my participation at PROFIT Magazine's GrowthCamp, the conference for the growth-company entrepreneurs who made the magazine's Hot 50 list in September.

In moderating a roundtable discussion with 10 GrowthCamp attendees, I asked each of them: What three words of advice would they offer other business owners?

Not all of them managed it in three words, and a few mantraa require some explanation. Overall however, I think their responses address a lot of key business challenges:
What’s your three-word business mantra?
Take six words if you need them.
Posted by Rick Spence at 10:43 AM 5 comments:

Where do we go from here?

What’s really going on in the world? Who’s winning the War on Terror? And how capable is the Obama administration of making the right decisions today?

If you're a fan of foreign affairs, you won't want to miss Condoleezza Rice in her upcoming Toronto appearance. The former national security advisor and secretary of state will be speaking on Tuesday, Nov. 2 at the Metro Toronto Convention Centre.

The event starts at 3.30, though you’ll want to get there sooner to drink in the buzz.

According to the organizers, this event "will give the audience a candid look into world affairs, the status of Canada and US relations, and an inside look into the current administration."
Tickets range from $100 to $180, or you can get the $330 VIP package that includes admission to the post-speech reception and an exclusive photo opportunity with Condi herself!
Click here for tickets. And if you use the promo code “world” you’ll get a discount off the list price.
This presentation is put on by Innovative Events LP, an entrepreneurial Calgary-based partnership that enables individual investors to invest in big-time speakers' events. Last year, Innovative Events brought Alan Greenspan to Calgary and Edmonton. Good luck to them in their foray East.
Posted by Rick Spence at 10:32 AM No comments: