“If you fear competition, all you really fear is your own incompetence.”

Richard Templar, The Rules of Management

As a longtime business writer and entrepreneur, Templar fills his books with homespun but incisive wisdom. I also like this quote from him:

"Any idea that there is something wrong should always be met with, 'And what would you like me to do about it?'"
Posted by Rick Spence at 8:06 AM No comments:

I wrote a blogpost recently for PROFITguide.com featuring some of the best cold-calling tips from Art Sobczak of Businessbyphone.com. Here are the bare-bones points:

Have call objectives.
Don't be too concerned about “best times to call.”
Always start at the highest level at which you feel your decision could be made (or even one higher).
When the screener informs you that the person you're asking for on a prospecting call is no longer with the company, without missing a beat, ask, “Who took his/her place?”
If you're prospecting out of a directory, try starting at the back: these people receive fewer calls.

Sobczak’s latest marketing offer is a free e-book with 501 “Telephone Tips That Sell!” To find out how to get it, visit my original post at profitguide.com.
Posted by Rick Spence at 7:57 AM No comments:

Francois Gossieaux and Ed Moran, in their new book: The Hyper-Social Organization: Eclipse your competition by leveraging social media

The authors claim that the right application of social media will restore humanity to business communications. That. they say, will “bring trust back into the equation and reduce transaction costs for all parties involved.”

Sounds grand, but I buy it. People want to trust each other. Life is easier that way.
But you have to give them grounds for trusting you.
Posted by Rick Spence at 5:00 AM No comments:

Lessons from the Erie Canal

My column in this week's Financial Post looks at the lessons learned in my trip last week on a barge along the Erie Canal, the nearly 200-year-old waterway that opened upstate new York – and indeed the continent – to western migration and settlement.

It’s hard to overstate the importance of the Erie Canal to the development of the United States, the North’s victory over the South in the Civil War, and the growth and success of New York City in becoming the world’s greatest centre of commerce and trade.
Yet today it’s a neglected backwater, a weedy, 600-km waterway for blue herons, fishermen, and the odd pleasure craft. (In our four days on the canal, my friends and I passed probably no more than a dozen boats a day. Although we hear July was much busier.)

In its day, however, the Erie Canal was an information superhighway, transporting people, goods and ideas throughout the state at speeds approaching 4 miles an hour (much greater than you could average in a carriage on that era’s roads). That’s why movements as diverse as abolition, women’s rights, utopianism and Mormonism flourished in upstate New York, and spread from there around the world. Even to Canada, eventually.

Not being much of a sailor, I learned a lot about boats and boating, knots, navigation and so on. And many of these concepts related to business, of course I wrote about it in my Post column.
Excerpt:
Boating is all about gaining advantage where you can, and so is business. But you have to know when to stick to your course. When you cruise the Erie, you get used to navigating in a narrow band -- there's no room for creativity. Sometimes, when the canal widens, you get the urge to break for the far shore or cut a corner. But we heard stories about the boaters who ran aground because they didn't realize the boating channel remains the same width, no matter how wide the canal may get.
It's a sobering reminder that not all corners should be cut. Not all shoals are marked. If you have a plan worth executing, improvising when things look easy may not be the best course.
You can read the whole story here.
Posted by Rick Spence at 11:46 PM No comments:

"Growth is only fun when everyone enjoys their work.”

My predecessor as editor of PROFIT Magazine, Randy has emerged as a top-notch business leader – but he still remembers how to write. With this quote, from a recent article in PROFIT Magazine, he encapsulates the challenge facing all growth entrepreneurs: how to expand the business without destroying the culture that makes it great in the first place.

Randy’s complete thought was this:

“Growth is only fun when everyone enjoys their work. When stress levels build because growth strains your existing processes, people and infrastructure, it's time to retool (itself a stressful exercise). And at this particular stage, it is not the normal, incremental retooling you've performed so flawlessly in the past. We're talking transformational, gut-wrenching change.”

You can read the rest of Randy’s article here.
Posted by Rick Spence at 5:24 AM 1 comment: 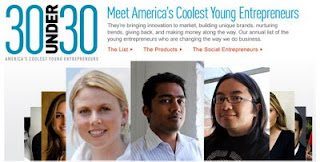 My column in last week's National Post analyzed Inc. Magazine’s recent list of Top 30 Entrepreneurs Under 30, to find out how this list of "America's Coolest Entrepreneurs" hints at the future of business.
The list consists almost entirely of Web-based services - think FourSquare, RedLaser ("Impossibly accurate barcode scanning"), Sprouter and CrowdFlower ("Labor on Demand") that connect people in new ways to create innovative information products, social games, strategic communities and business solutions.
Excerpt:
“Crowd-sourcing, community, databases, social entrepreneurship: The future, it seems, is all about sharing. The service economy has never looked so good.”

Check out this story here: http://tinyurl.com/2bynqcf
Posted by Rick Spence at 8:16 AM No comments:

My column in this week's Financial Post looks at why small business owners should be looking to hire more immigrants to solve their talent-shortage problems – and how they can start getting better connected to ethnic communities.

My source: Deepak Chopra, president of Pitney Bowes Canada, an immigrant hmself who has led several initiatives in which PB works hard to attract, develop retain and encourage multicultural talent. As he says, "In the boardroom, diverse talent tends to hold back."
Excerpt:
Leveraging immigrants' skills would also help companies tap fast-growing consumer markets, such as the Chinese populations in cities such as Richmond Hill, Ont., and Burnaby, B.C., says Chopra. Family businesses especially would benefit from hiring skilled newcomers to complement the family's skill set and help them identify and serve new markets.
Click here to read this story.
Posted by Rick Spence at 8:03 AM No comments:

“Don't get too excited about the small accomplishments or disappointments along the way. You celebrate and learn from them; but realize that it’s a marathon, not a race.”

I just got around to reading Conrad Black's account of his last days in Florida prison.

Whether you think him guilty or innocent, his journey has been an epic one. His career may soar yet again, but he will never be the same after this experience.
If you haven't read this column from the July 31 National Post, you should. Click here to read, "My Prison Education."
Excerpt:

"The Mafiosi, the Colombian drug dealers, (including a senator with whom I had a special greeting as a fellow member of a parliamentary upper house), the American drug dealers, high and low, black, white, and Hispanic; the alleged swindlers, hackers, pornographers, credit card fraudsters, bank robbers, and even an accomplished airplane thief; the rehabilitated and unregenerate, the innocent and the guilty, and in almost all cases the grossly over-sentenced, streamed in steadily for hours, to make their farewells.

Most goodbyes were brief and jovial, some were emotional, and a few were quite heart-rending. Many of the 150 students that my very able fellow tutors and I had helped to graduate from high school, came by, some of them now enrolled in university by cyber-correspondence."

Also recommended: The Post's Jonathan Kay on how Conrad has changed
Posted by Rick Spence at 12:28 PM No comments:

In a speech to a ocnference yesterday in Honolulu, Hawaii, one of the things I spoke about was the importance of revising - and then re-revising - your mission statement.

Afterwards, one of the delegates told me that a few years back, when he was working for a major U.S. media organization, he and a colleague were asked to come up with a mission statement for the company.

To make a long story short, they come up wth something that made the bosses and customers happy, although it sounds like no one ever used it, and he couldn't even remember the words today.

On the way, though, they came up with a pretty memorable mission statement they only wished they could use:
"We want to make as much money as possible without going to jail."

Given that a mission statement is supposed to convey key messages about your customers and the value you create for them, I think this is an outstanding piece of work. It certainly focuses people on what's important to the organization.

And it would definitely help prospects and customers a make well-informed decision.
Posted by Rick Spence at 2:24 PM 1 comment: