Regina Report: The lowdown on Based in Business

(Originally published on FinancialPost.com)
REGINA — If you read my Financial Post column on Tuesday, you will know that I am reporting from the University of Regina, which is hosting Based in Business, an innovative week-long bootcamp that is helping 19 Canadian military veterans become smarter, savvier entrepreneurs.

As a business journalist in Toronto specializing in entrepreneurship for 25 years, I have had limited exposure to military personnel or veterans. After two busy days of classes and conversation, it’s clear to me Canada’s veterans are incredibly intelligent, engaged people who are deeply concerned with the world around them and still anxious — whether they’re 39 or 59 — to make their mark on it.
For this update, a few observations about my classmates and the program:
Stereotypes aside You can’t stereotype veterans. There’s a wide range of personality types here, from grim, results-first types to class clowns and process-oriented intellectuals. In general, however, they are eager to learn, they ask great questions, and they’re quick to respond whenever an instructor asks for volunteers. If there’s a new experience to be had — even if it’s exposing your nascent business plan to the scrutiny of the entire group — they are quick to grab it.
Pride and patriotism They’re proud of their military careers and fierce patriots. They believe in the Canadian Forces as the home of high-performing specialists who continually form and reform teams based on shared values, trust, and willingness to sacrifice their individuality for the sake of the mission. They’ll kid each other mercilessly, but watch out for each other like brothers and sisters.
Equality in the classroom I’ve been very impressed by the absence of rank. At this camp, majors and corporals and warrant officers work and socialize with each other as equals. In their heads, they have probably all figured out the approximate ranks of all their colleagues, but they know this is a new world where everyone can learn from each other.
Shared Values The veterans at Based in Business Regina — many of whom are still on active military duty, for one more week, six months, or up to two years — miss their military experience, but are excited about the business adventures on which they’re embarking. They worry, however, that the culture of shared values and trust will not be present in the business world. I have tried to convince several of them that in most industries and markets, trust plays a huge role in business. Indeed, we could barely make agreements, collaborate or buy from each other without a strong sense of mutual trust. They’ll believe it when they see it.
(On Tuesday evening, the veterans met nine Regina entrepreneurs for speed networking: a series of 10-minute get-to-know-you sessions. Many seemed blown away that so many successful local entrepreneurs would take the time to meet with them, and show so much interest in their business plans. I tried to tell them that they will find caring and supportive business networks wherever they go in Canada. They’ll believe it when they see it.)
No sympathy expected In general, these veterans think the Canadian public is indifferent to their military experiences and their sacrifices. But they don’t really expect anyone to care; “the man on the wall” does it out of a sense of duty, not for other people’s appreciation. Several of these vets have suffered injuries, both mental and physical, but they have worked hard to overcome them and expect no sympathy. Just a fair shake.
Competitive, confident Yes, they’re competitive. And they have no doubt their business ideas are going to succeed.
Slowly, however, these veterans are realizing confidence is not enough, and that in business, overconfidence can kill. So far, the instructors from the University of Regina have managed to sow some healthy self-doubt. They’ve demonstrated that the first job of any startup — selecting a promising market and the most appropriate business model for it — is more complex than these budding entrepreneurs thought.
That’s a good thing. These veterans know every successful mission begins with an objective assessment of its threats and opportunities.
The participants’ resilience has been seen again and again. Between Monday morning and Tuesday afternoon, many changed the way they described their business objectives. Some who arrived with a dram of pursuing two or three business ideas at once have winnowed them down to one — the most promising opportunity they can see. Others learned to finesse their plan, narrowing down their addressable target market or resetting their expectations of how long it would take to succeed.
Based in Business has a difficult mission: Improve the prospects of its confident, capable participants while showing them how much they don’t yet know. Without that kind of tough love, how can they learn to put in the huge effort required to succeed?
But so far, the process seems to be working. Probability of mission success: almost certain.
Posted by Rick Spence at 6:34 PM No comments: 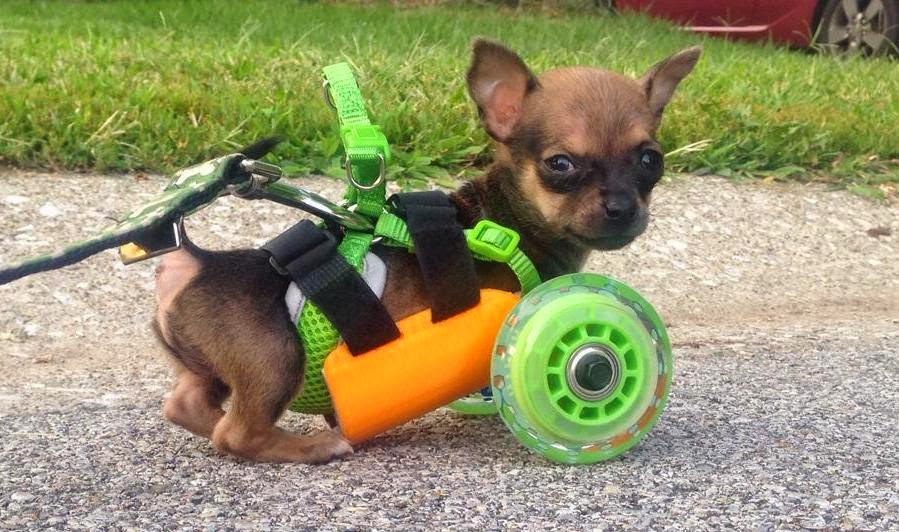 I wrote a few years ago that 3D printing changes everything. Here's a phenomenal example.

TurboRoo, a tiny Chihuahua, was born without front legs, an innocent victim of random genetic dysfunction.
Every critter on the planet wants to be mobile, to roam, to explore. TurboRoo's owner asked for help on the Internet - and got it.

According to a story on TechCrunch, "Mark Deadrick, president of 3dyn, saw TurboRoo’s call for wheels on the Internet and designed a small wheeled cart, estimating the size from online photos. He printed the card in bright orange, slapped on some Rollerblade wheels, and sent the cart to TurboRoo’s owner. Now the wee doggie is scooting along on a free, fully hackable set of super-legs."
Before now, notes writer John Biggs, "TurboRoo’s owners would have had to build something out of ready-made pipes, cloth, and other materials at great cost. Now, however, the cart can be custom-fit to TR’s body, reprinted at will, and even modified by other designers. Best of all, they can make multiple carts for almost nothing and in almost no time."

This is the miracle of 3D printing. With a little design help - and the number of freely available templates for 3D printed objects is growing every day - it's now possible for the consumer (or entrepreneur) to manufacture virtually anything they can dream of - out of almost any substance. (Chocolate is becoming an increasingly popular building material.)

The business implications are staggering. Sell designs. Create and sell works of art. Scan in and reproduce spare parts. Medical devices. Sculptured foods. Customized bobbleheads.
Remember Star Trek's transporter? We still can't actually teleport, but you can now download the plans for almost any device to your home or office, and reproduce it on a 3D printer costing less than $1,000. (20 years ago,we paid more than that for a fax machine.)

How can 3D printing enhance your business or industry?
How can you get ahead of the trend?
Posted by Rick Spence at 12:09 PM No comments:

Youth entrepreneurship, making a difference, and trying to smash an iPhone

All this and more was on the agenda Thursday, Aug. 7 when Rick appeared on Global's "Morning Show" with 20-year-old entrepreneur Richard Waters, founder of Toronto-based Phantom Glass. The company produces an amazing glass cover for smartphones that is scratch-proof and highly protective.
I had seen a video on Richard's website that depicted someone striking an iPhone with a hammer to prove how tough Phantom Glass really is, so I asked if he had brought a hammer to the studio. He hadn't, so we borrowed one from the production crew.
It was, of course, the highlight of the segment.
Take six minutes and bask in the new frontier of youth entrepreneurship.

Posted by Rick Spence at 4:23 AM No comments:

"We had no business plan, just an idea"

You can help our veterans start stronger businesses and make more successful returns to civilian life.
Through my Indiegogo crowd-funding project, serving military personnel and veterans alike will be able to access a free startup eBook geared to their specific needs.
“Startups for Heroes” (tentative title) will offer the best business information and startup guidance from “Based in Business,” a one-week business bootcamp being held for Canadian Forces veterans later this month in Regina. I’ll be there to cover the lessons learned and tell some of the participants' stories.

Why do veterans need this help? Because while the Forces and Veterans Affairs offer military retirees lots of advice on how to find a job, they don't do such a good job on starting your own business. Given today’s economy, many veterans are eager to start a business – but don't know what to do first.
Help them start their new lives on the right foot. Please visit “Startup for Heroes” and support one of my funding levels.
How can a startup bootcamp change people’s lives? Here’s a new story by Amanda Moore of Niagara This Week on a veteran who retired this month and just completed a “Based in Business” course in St. John’s. Leendert Bolle served one tour in Bosnia and two tours in Afghanistan. He and his wife Annemarie now own Hero Dog Treats in Beamsville, Ont.
"We had no business plan, just an idea that we put into action," says Leendert. Based in Business "made a difference in my business, taking it from surviving to thriving."
Besides creating a living for the couple, the business employs veterans who may be struggling with their own return to civilian life. "The struggles of veterans became apparent to me two years ago," Leendert told Niagara This Week. "I told my wife we had to do something to help them."
With the information he learned at Based in Business, Leendert hopes the company will grow to the point where it can employ 20 to 30 veterans. "The program has given me the tools to make it happen," he says. "It has given me the opportunity and support to go out into the world and give it all I've got."
This is the power of a smart business: the ability to create confidence for individual entrepreneurs, value for customers, and jobs for those who need them.
But “Based in Business” is an expensive program. It can only help a few dozen veterans a year. Please support my eBook project so we can get this information into the hands of every veteran – and every Forces member – who wants it.
Click here to read the full story of Hero Dog Treats.
Click here to visit the “Startups for Heroes” page on Indiegogo.
Posted by Rick Spence at 10:03 AM No comments: