Keeping up with the Next 36

﻿﻿Someone (yeah, it was me) once called the Next 36 “the most intense, hot-house effort to force grow entrepreneurs ever attempted in Canada." It’s a fascinating social experiment: take 36 undergrads – bright, driven, and proven leaders – give them capital to form companies, and expose them to the best business thinking from successful entrepreneurs and innovative academics from the U.S. and Canada. The goal: to encourage a new generation of high-impact entrepreneurs who will understand opportunities, risk and resources, and will never think small in their lives.
I've been a big fan of the program, which has just finished its second year. It’s got Bay Street and the Canadian Establishment rubbing shoulders with the new app/Meetup/lean/startup/incubator/accelerator economy, and that alone is an amazing feat. Plus, the program has turned many accomplished entrepreneurs into experienced, thoughtful mentors, and that could also pay dividends for years to come.
I've been writing quite a bit about the program recently, mainly for the Post, so here’s a recap and some links to get you caught up with the Next 36’s world of frenetically modified entrepreneurs:
·     Driving home the importance of the pitch – in which I sit through a class with the Next 36 on a hot summer afternoon, and watch Next 36 co-founder Reza Satchu doehis best to make his charges as uncomfortable as possible.
http://business.financialpost.com/2012/08/12/driving-home-the-importance-of-the-pitch-and-how-zipcar-failed-the-test/
·     How Facebook Canada keeps in fighting trim – a sort of sequel to the above story, since Facebook’s Jordan banks was the guest speaker in the class I attended. He had some cool points to make about Facebook culture that I thought all entrepreneurs should hear (not just the Next 36).
http://business.financialpost.com/2012/08/14/how-facebook-canada-keeps-in-fighting-trim/
·     Why the Next 36 matters for all Canadian entrepreneurs –summing up my thoughts on the Next 36 experience during “Venture Day,” the venture fair-cum-graduation exercise that marked the formal end of the program for the class of 2012. Excerpt:
“The Next 36 isn’t about the seven new app-based companies that pitched their business plans at last week’s graduation ceremony in Toronto. The Next 36 is a bet on the long term: that 10, 20 or 30 years from now, these kids will find ways to shake things up, whether they’re on Bay Street, in their own businesses, or in academia, the arts or non-profits. “
http://business.financialpost.com/2012/08/20/why-next-36-matters-for-all-canadian-entrepreneurs/


·     Entrepreneurship Lessons From Graham Weston – A final letter from Venture Day, written for PROFITguide.com, covering the thoughts of guest speaker Graham Weston, chairman and cofounder of web hosting upstart Rackspace. Again, his comments were too good to limit them to just the overachievers of the Next 36. "Entrepreneurship is about being famous for something very specific—something you do for your customers,” says Weston. And yes, Rackspace owes all its growth and success to that one simple idea.
http://www.profitguide.com/manage-grow/leadership/entrepreneurship-lessons-from-graham-weston-39641
What will your company be famous for?
The Next 36 is now inviting applications for its 2013 program. For more info, click here.
Posted by Rick Spence at 10:28 PM No comments:

Catching up on a Busy Summer

I hope you're having a great summer. It's been quiet around this blog because I've been so busy. Let’s catch up on some of my recent National Post columns.

On Aug. 6 I wrote about a fascinating entrepreneurial bootcamp for Canadian Armed Forces personnel and retirees who want to start their own businesses. The veterans had the time of their lives, and they all stood in a circle and held hands at the end. (True story that I didn't have room to print.)
http://business.financialpost.com/2012/08/06/canadian-forces-mean-business/

On July 30 I offered some ideas on how to build an online community around your business. It’s the future of business, you know.
http://business.financialpost.com/2012/07/30/how-to-build-a-community-to-boost-your-business/


And on July 23 I shared some key impressions from my Newfoundland entrepreneurship tour with Startup Canada. Sample observation: when the industrial heart of a smaller community fades (say, the local mine or pulp mill closes down), smart entrepreneurs refocus on the remaining economic driver – which may be the regional hospital, or even a Walmart. How could your business partner with local institutions to supply complementary services?


And on July 27, I penned an online-only piece called “Lessons from the Olympics: Own your own podium.” Read it now before the 2012 games are history.http://business.financialpost.com/2012/07/27/lessons-from-the-olympics-own-your-own-podium/ 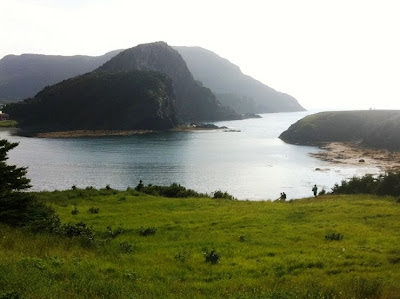 Bottle Cove, Nfld (near Corner Brook). Photo by Ron Taylor
Posted by Rick Spence at 8:17 AM No comments: