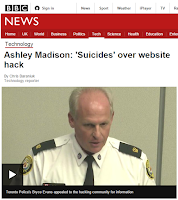 
Wikipedia says Ashley Madison has 39 million users. 90-95% are male. Says Wikipedia: “This is not revealed to prospective users.”
Posted by Rick Spence at 3:09 PM 2 comments:

What's the difference between a startup and a business?

In the new "lean startup" methodology, a startup is very different from a business. A business is an organization (or individual) that normally executes a proven business strategy. By contrast, a startup is an organization or initiative in search of a successful business model.
This approach is useful, because it doesn't demand perfection from a startup; when you acknowledge you are merely searching for the right success formula (rather than simply executing a formal business plan), you are more likely to tolerate mistakes, learn from them, and make changes (or as the kids today say, pivot) sooner to help you become more successful.

You can read the original Quora post here.
Posted by Rick Spence at 12:28 PM No comments: