A trip to Vancouver kept me hopping this week. It was the last leg of my three-city speaking tour, which involved presenting to dentists and dental professionals on 7 ways to grow their practice.

The trip included a very late outbound flight and lost luggage (by the airline, not me) on the way back. Like all business trips, the only surprises were bad ones. Until I went to check out of my hotel. That's when ... well. you can read the rest in my Financial Post column next Monday.

Vancouver as usual was wet, but very warm: plus 12 degrees C on Monday was a lot better than the bone-chilling -12 on Saturday in Toronto. I had a lunch in Nanaimo on Tuesday, which called for a 90-minute ferry ride through the most beautiful scenery on earth, so it wasn't all hardship. The trip back, which featured a beautifil rainbow to the east and a sunset on the west, was pure BC gold.

One discouraging note: the Christmas shopping season got off to a slow start. Park Royal, West Vancouver's largest mall, was a ghost town Monday night. It was the first day of extended Christmas hours (most stores close at 7 pm the 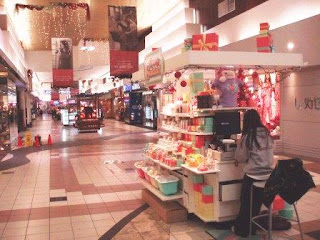 rest of the year), and no one seemed in a shopping mood. There were more soccer players practising outside in the rain at the park next door than there were shoppers in the stores - despite some great bargains, and a snowstorm two days earlier that should have triggered the new-skiwear instinct.

One more point: I was very impressed with being able to pay for a downtown parking spot on Robson Street via cellphone, when I found myself stuck without change. Viva la high tech!
Posted by Rick Spence at 7:03 AM