“I'm not a dreamer, and I'm not saying this will initiate any kind of definitive answer or cure to cancer, but I believe in miracles. I have to.” 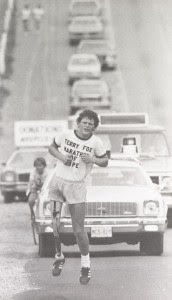 Terry Fox was born on July 28, 1958. He lost a leg to cancer in 1977. In October 1979 he asked the Canadian Cancer Society to support his run across Canada to raise money for cancer research. His letter included the above quote.

Terry's Marathon of Hope saw him run halfway across Canada on an artificial leg before his illness forced him off the road. He died in June 1981. Since then, the annual Terry Fox Run and related charities have raised $400 million for cancer research.

Today is Terry’s birthday. He would have been 50 years old.

Thanks for sharing this quote - Terry Fox really is an inspiration. Last year my oldest did his first Terry Fox walk with his school. This year I'm pursuing my dream of entrepreneurship and this quote is very motivating (as is much of your blog!) Thanks!