One small step for a man...

July 20th, 2009 marks the 40th anniversary of the first lunar landing by Apollo 11 and its intrepid crew: Armstrong, Aldrin and Collins. 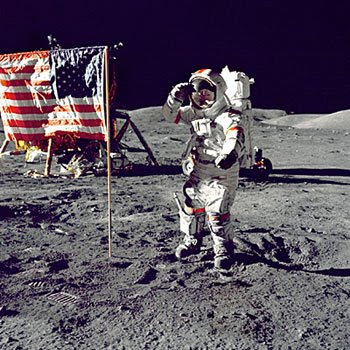 It turns out that Canadians played a big role in making the moon landing happen.

At a press conference today at the Canadian Air and Space Museum at Downsview Park in Toronto, the contributions of Canadians to this great endeavour will be celebrated for the first time.

* Did you know a Canadian, Owen Maynard, was in charge of NASA’s Lunar Module Program and played a key role in the design of the lunar module?
* Apollo 11 astronaut Buzz Aldrin thanked two former Avro Arrow engineers for their contributions to the success of the Apollo 11 mission.
• More than 25 Canadian engineers left for NASA following the cancellation of the Avro Arrow in 1959, making an indelible mark on the manned space program.

Present at the conference will be Canadian astronauts Roberta Bondar and Bjarni Tryggvason, Avro Arrow Chief Design Engineer Jim Floyd, and Chris Gainor, author of Arrows to the Moon. Along with Canadian aerospace legends and test pilots.

Sounds very, very cool. Hopefully, we will all learn more on the TV news and in the papers.

Plus there will be special messages from Buzz Aldrin, Apollo 15 commander David Scott, and some guy named Harrison Ford. (He will probably be bragging about making the Kessel run in less than 12 parsecs.)
Posted by Rick Spence at 11:59 PM