I don't get to break many stories here on Canadian Entrepreneur, but because I’m working late tonight [I’ll sleep on the plane], here’s a world scoop:
There seems to be a happy ending after all to one of the most controversial stories to appear on the CBC’s Dragons’ Den show. 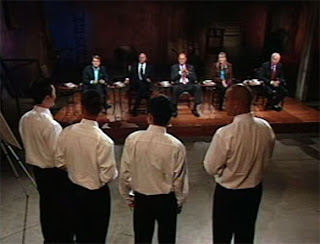 JobLoft.com, an online job-listings company founded by four business graduates from Toronto’s Ryerson University, made waves last year by squirming out of a buyout offer from all five dragons. Last season's final episode, following up on the deals made during the show, depicted how the founders’ advisor, one of their former professors, insulted the dragons during a meeting to close the deal. After the prof questioned the millionaires' "measly" investment, nice-guy dragon Robert Herjavec took back the $200,000 cheque (for half the company) and tore it up.

That stimulated lot of online debate: should JobLoft have taken the deal?

Today, JobLoft announced it has been acquired by Texas-based Internet recruitment company OnTargetJobs. No price was disclosed, but JobLoft CEO Chris Nguyen told me two months ago that he was working on a deal that offered a much more generous valuation than did CBC’s Dragons. A deal would now cost “seven figures, plus,” Nguyen told me.

(In fairness to the dragons, I should mention that when JobLoft appeared in front of them in August 2006, the company had a website and a great niche – localized retail and hospitality jobs sorted by postal code – but no paying clients.)

“… JobLoft.com’s concentration on the hourly jobseeker looking for local jobs coupled with Hcareers’ worldwide reach and industry presence enables Hcareers to provide a more holistic solution to its hospitality, restaurant and foodservice clients.”

Nguyen offered this quote in the release: “This is such a great move for the hospitality industry as a whole. Our loyal following in the hourly job-seeker space is going to flourish from this new ownership as we’ll now be able to expand the opportunities available to job seekers in their own communities.”

Allen Paschal, CEO of OnTargetjobs, offered a happy soundbite: "We are ecstatic to be able to have the JobLoft team join our family and together with the existing Hcareers product offering, we will leverage the excellent technological advancements that JobLoft offers the hourly hospitality and retail marketplaces. With name-brand clients such as Starbucks, Wal-Mart, Hudson’s Bay Company and Sobeys, JobLoft has developed an excellent reputation within the industry.”

Congrats to JobLoft for making a deal and getting this monkey … er, dragon … off their back. Now let’s see what they can really accomplish.

See my previous post on JobLoft
See my story on JobLoft in the September issue of PROFIT
Posted by Rick Spence at 2:40 AM

LOL about dragon off their back.

Congratulations to Jobloft! It's always nice to see a Canadian Web2.0 company getting a successful exit.