Here's another installmen in our weekly series of inspiring quotations specially selected to get you and your business off to a fabulous week.

In honour of Week 57, here's a quotation from the founder of Heinz. Keep in mind that this quote dates back about 120 years, back when enlightened employers were few and far between:

By all accounts, Mr Heinz was a remarkable man. Among other things, he invented the ambitious slogan, "57 Varieties." It taught consumers to think of Pittsburgh 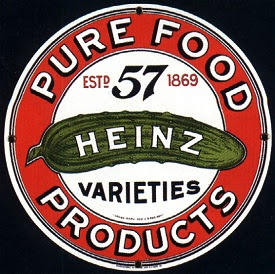 -based Heinz as a producer of a family of food products, not just pickles or ketchup. It was one of the first deliberate branding successes. Signs bearing that number aone could move Heinz product - even though at the time the slogan was adopted (1896), Heinz already offered more than 60 different products. (The number is now well over a thousand.)

Proof that marketing is not about literal truth, but creating impressions in customers' heads.

As for "heart power"? In a heartless Dickensian age of labour exploitation, Heinz chose to attract and motivate quality workers by treating them well. Known as the Prince of Paternalism, Heinz offered employees better conditions at work than most of them knew at home. (Women on the assembly line even received weekly manicures.)

In an age of substandard manufacturing practices, Heinz was dedicated to producing the best. "Quality is to a product what character is to a man," he said, and walked the walk by leading the fight for the controversial 1906 Pure Food and Drug Act - landmark legislation that first prescribed truth in food labelling.

A more famous version of Heinz's credo: "To do a common thing uncommonly well, brings success."
Posted by Rick Spence at 11:41 PM