Leading to the Future

Here's an example of leadership for you.
Brian Burke is a mod 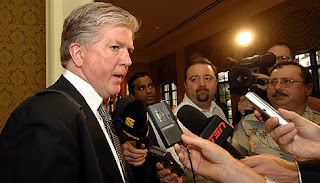 erately successful NHL executive who just signed a deal to become president and general manager of the Toronto Maple Leafs. It's obviously a tough job, but expectations are high. How do you come into this kind of situation and establish your personal leadership brand?

Here's how Burke handled it in Sunday's Toronto Star when he was asked about the future of key Leafs' front-office staff such as Cliff Fletcher, Joe Nieuwendyk and Jeff Jackson:
"I believe in giving people an opportunity to prove themselves," said Burke. "Cliff has a job here as long as he wants one, as far as I'm concerned.... I have a lot of time and respect for Joe. The rest of the front office, the same thing. Everyone is going to get a chance here to show that they want to be part of things and do it my way and be part of the future here."
This is how you take over leadership of a team. Emphasize your respect for everyone who's there, promise to give everyone a chance to prove themselves, and point to a better future.
But leave no doubt that things are going to change. Your way.
Posted by Rick Spence at 10:19 PM