The American Express Small Business Monitor finds that even in today’s tough times, 76% of entrepreneurs believe that the rewards and opportunities of running their own business outweigh the risks and challenges.

Startlingly, the survey found that one in four Canadian small business owners have stopped taking a personal salary. Another quarter have invested personal funds in order to continue to support employees during the current economic downturn.

More traditional cost-saving tactics include cutting back on expenses (60%),curbing personal spending (48%), and increasing customer value (46%) to improve cash flow during the downturn.

Attesting to the long-held belief that a business's greatest asset is its employees (see previous post), the survey's respondents indicated a willingness to sacrifice to retain talent and keep employees happy, including the continuation of bonuses (30%) and pay raises (28%).

Respondents to last fall’s Small Business Monitor said they were hoping to ride out the downturn making many changes to their plans or practices. Now entrepreneurs report that they have already taken steps to protect their business, such as:

You can read the full press release here. 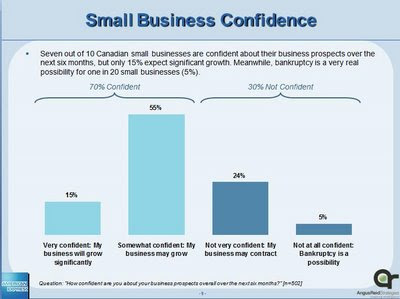 Even in this downturn it's good to hear that entrepreneurs aren't having to lay off employees and are optimistic about the future.