We interrupt this business blog to bring you this breaking sports story.

Congratulations to Clara Hughes, the Canadian flagbearer in 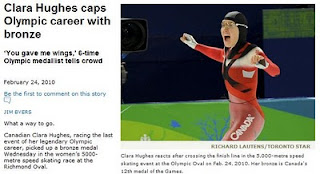 the Vancouver Olympics, who just won the bronze medal in the 5,000 metres speed-skating event - at the age of 37.

As mentioned Monday, when the indomitable cyclist-turned-speed-skater was featured in our Quote of the Week feature, Clara is one of very few Olympians to win in both the Summer and Winter Games - and apparently the only athlete ever to win multiple medals (i.e., more than one) in both.

Earlier this week we praised Clara for her can-do attitude - she competes with herself, not her opponents. Today, let us praise her for her graciousness in victory (yes, I think 3d place is a win). When she won her medal, she credited the Canadians watching her for the victory:

“It’s such an amazing feeling,” Hughes told CTV. “I want to say thank you to this amazing crowd once again. You gave me wings.”

Surely all business peope could learn from that kind of grace under pressure.

Hughes actually set the course record for the Richmond Oval in today's race, although it was eclipsed by a skater who followed.

The QMI Agency story at the Toronto Sun website makes the case that Hughes is "arguably the greatest Olympian in Canadian history."

Hi, ur blog is really interesting & informative , while reading it I truly like it . I just wanna suggest that u should go for blog advertising & marketing there is a website which is offering very unique features at cheap prices there are expert advertising team who will promote ur blog & affiliate ads through all over the networks which will definitely boost ur traffic & readers. Finally I have bookmarked ur blog & also shared to my friends.i think my friend might too like it hope u have a wonderful day & !!happy blogging!!.