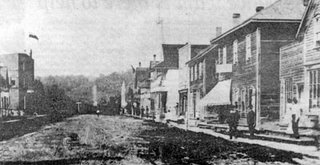 So I drove through Trout Creek...

Maybe I should explain. At the Ontario Global Traders Awards luncheon in North Bay on Thursday, I got talking with Victor Fedeli, the mayor of North Bay, and we started talking about “twinning” – the ongoing project to convert Hwy 11 from a two-lane road to four-lane divided highway all the way from Huntsville to North Bay.

They’ve been working on it for years, and there’s only about 25 miles to go. I suggested that it would be nice to see it finished, but the mayor expressed regret about what will happen to some of the communities along the way.

He said Emsdale, Burk’s Falls, Trout Creek and other communities that grew up along Hwy 11 have hit hard times now that the highway bypasses them entirely. And he expressed concern for the future of South River, Sundridge and other towns that the two-lane highway currently drives right through.

I could see his point. On the way north Wednesday night, I stopped at a bank in Sundridge, thinking how convenient it was not to have to go searching for a bank machine once I got to North Bay. That transaction wasn’t worth much (if any) revenue to the town, but I could see how preferable it is for the community to have all that through traffic funnel through downtown rather than take their business to Huntsville or North Bay. In fact, Mayor Fedeli mentioned going off the highway recently to get some gas at Emsdale – where the station owner said he was the only customer of the day. One more local business that won’t last much longer.

Like Mayor Fedeli, I care a lot about small towns. So on the way back home from North Bay, I pulled off the highway at Trout Creek to see what today’s busy motorists are missing.

A couple of restaurant, a motel, and one of those dingy old two-storey hotels (one of the last old buildings left on the main street) that makes you wonder who would ever stay there. Plus a really ugly lumber yard with piles of greying wood. Nothing distinctive – or even attractive - about the place at all. If Trout Creek is dying, it’s by suicide.

Irma’s Restaurant might be a great place to eat. Maybe they have fresh daily specials, or homemade desserts, or special kids’ menus. Who knows? Irma isn't talking. The sign just says “Irma’s Restaurant,” so you better know Irma going in – or be prepared to be surprised.

Is marketing dead in northern Ontario? A hooked trout would fight harder to survive than Trout Creek seems to be doing. (Maybe they should change their name to Minnow Creek?)

Why not put signs along the highway giving people a reason to pull into town? “Visit historic Trout Creek.” Put up a plaque talking about the difficulties faced by early settlers. The old railway hotel could be restored and turned into a working tourist attraction – see where people stayed in the years before Motel 6. Irma could promote lunch specials or free coffee refills – anything to let people know she’s in business to serve and eager to help. Maybe the village council could put up some new playground equipment and invite tourists with kids to stop in for a break.

Like Mayor Fedeli, I wish all small towns could flourish. But you have to put up a fight. Give people a reason to visit – or suffer the fate you deserve.

Notes: (According to this site, the taxpayers of Ontario paid $46 million to bypass Trout Creek! If we had known the village would roll over and die, we could probably have steam-rollered it and saved a bundle by not building 5 km of new highway.)

Thanks to this site for the old postcard of Trout Creek (which has a lot fewer buildings today than in the old photo). It also features a short history of the village, which makes me think today’s residents are letting their forebears down badly.
Posted by Rick Spence at 6:32 AM

I grew up in Trout Creek and I can address correctly what you have unanswered in your article. First off, Irma's is named after the first owner, and is a successful business and the owners and staff are quite friendly. "...you better know Irma going in – or be prepared to be surprised." This statement clearly shows that you did not venture into the restaurant, and therefore should not make assumptions about a place you have not eaten at. The old Hotel is being converted from the towns only drinking establishment to a bed and breakfast, anticipating the ongoing construction of Hwy. 11, the building of the Trout Creek Observatory and the Trout Creek Wind Farm. And the greying wood, that's simply because it is weathered, what you don't know about the lumber industry shines light on what you may not know about much else in general. That lumber can be sent through the planner and it is as good as new.
Now you speak of Trout Creek's death as by suicide, and I have to agree with you there, for ages Trout Creek has suffered by its own hands, discouraging development and expansion. Trout Creek's only gas station was closed down by the owner shortly after the bypass was built, too early to estimate his losses, and now the residents of Trout Creek and the surrounding area are sent to other towns in search of gas and diesel. However, even with this in mind, the recent amalgamation of the towns of Trout Creek, Powassan and the Township of South Himsworth into the Municipality of Powassan, has allowed for the council mainly made up of Powassanites, to centralise everything in the new municipality in and immediately around Powassan. With regards to the lack of signage, the blue signs that can be seen on all hwy's are for some reason not being allowed to promote the businesses of Trout Creek, something that is taken care of by the province. And to address the twining of Hwy. 11, this is a step in the right direction, it means safer and better access to all places in Central and Northern Ontario, and Trout Creek shouldn't suffer from it as it is the eastern terminus of Hwy. 522, a valuable and one of few links to the cottage country of the Loring-Restoule, whose population increases exponentially in the summer months. There is more that underlies the troubles of Trout Creek than you have alluded to in your article, and I would suggest that you do more indepth research before posting next time.

Thanks for the comment. I'm sorry I can't apologize for not venturing into Irma's; I saw no signs or other communication indicating I was welcome, or whatI would find if I did. Businesses that don't offer a reason for passers-by to drop in shouldn't expect many to do so.

I am delighted that we both share a passion for towns such as Trout Creek to make the most of what they have, instead of settling for whatever happens to them.