I just checked the website of Canadian Business Online. It contains 118 references for Conrad Black - and zero for Ed Mirvish. 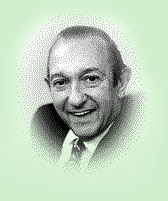 Sir Ed, who died this morning just two weeks shy of his 93d birthday, was a Canadian retailing icon and a cultural impresario. He made many mistakes, but he made things happen - as opposed to Conrad Black, who despite his headline-grabbing dealmaking really just buys and sells properties that other people have built. (The sole exception of which I am aware is the National Post - although it was certainly built on top of the pre-existing Financial Post daily.)

Ed Mirvish, of course, stuck to his knitting - his tawdry, beloved Honest Ed's, which may have been the world's first discount department store, and the theatre. He didn't grab headlines. He didn't expand his retail concept across Canada (although he had many offers). He merely saved (and expanded) Toronto's (and thus Canada's) live-theatre scene. And his single store survived the shakeout in Canadian retailing that saw everything from Towers and Bi-Way to Eatons and Simpsons wiped out one by one.

Simple, plain-speaking and embarrassingly self-promotional, Ed never got the respect he deserved. The media today have focusing on his "city-building" contributions in saving Toronto's Royal Alexandra Theatre and building the daring Princess of Wales Theatre. Sure, he proved that business can make a valuable contribution to the culture of a 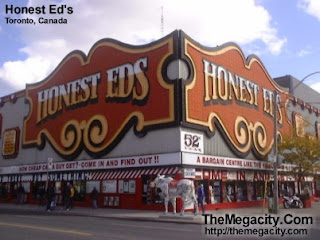 nation. But the media seem reluctant to portray him as a hero for running a tawdry, Vegas-looking discount store.

Even though Honest Ed's has lasted 59 years. Even though it has set a wonderful example of how a business can create long-term value for its customers and give back consistently and generously to its community. And even though Ed proved that business can be fun.

While the world waits to hear the final fate of Conrad Black, the verdict is in on Ed Mirvish. He was a builder and entrepreneur par excellence. And he will be missed.

Update, July 22: The day after I wrote the above post, CanadianBusiness.com actually mentioned Honest Ed - in their retailing blog, written by Zena Olijnyk. Funnily enough, she wrote about what the store meant to her as child. Not about Ed as an innovator. Not about the store as a trend-setter, or even (later) as a niche retailer that knew its market better than anyone. In a country bereft of disruptive, entrepreneurial vision, I think CB missed the story.
Posted by Rick Spence at 11:52 PM

Ed Mirvish is an inspiration to entreprenuers everywhere. Conrad Black is clearly the Darth Vader of business.

I am sorry that you even mention Darth... I mean Conrad in your tribute to Honest Ed.

Regarding the Canadian Business Oline lack of news about Honest Ed... what does that tell you about what business they are really in?