Your Next Big Export Opportunity?

Three years ago I worked on a feature for PROFIT Magazine about opportunities for Canadian exporters in Nigeria. Some people snickered. 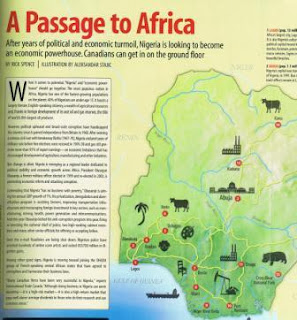 Chronically broke, tragically and corruptly misgoverned, Nigeria has been the poster boy for failed African regimes. In fact, with its difficulties enforcing the law and its subsequent reputation as ground zero for spam Internet scams – not to mention its inability to secure its own oil refineries from terrorists – Nigeria had become a laughing stock.

But all that may be changing. An article from INSEAD, the France-based international business school, sees reassuring signs at last of a turnaround in Nigeria.

* The crackdown on corruption has led to the seizure of $5 billion in assets for the state.

* With the election in 2007 of president Umaru Yar'Adua, Nigeria has now held three elections in a row without a coup d’état – which some observers consider a signal to invest.

* Government fiscal reforms have broken the link between oil prices and government spending. Between 2003 and 2006, foreign reserves increased fivefold to about $38 billion. (They're now around $$60 billion.) The government is nearly debt-free. (Take that, George Bush!)

There are still challenges, to be sure, including inadequate power supplies, roads and public transportation, and issues around the enforcement of contracts and a national ID system. But with improved governance and rising revenues, these issues can now be addressed.

What do you think?