Soft Landing into the New Economy

I got back late last night from Dryden, Ont., which is so far north and west that people go to Winnipeg for the weekend. Flying low over the lakes and forests of northern Ontario is a huge treat in Bearskin Airlines’ Fairchild Metroliners - they may be small, but every seat is a single, so you have both aisle and window.

I was a keynote speaker at the FI:RE 2008 conference in Dryden, put on for the entrepreneurs of the Northwest. (The other keynoters were tireless networker Donna Messer and fashion revolutionary Ben Barry, so 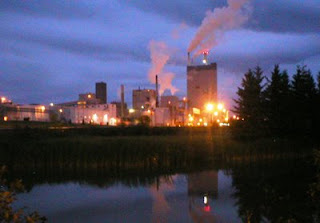 it was a dynamite program).

Like many resource towns, Dryden has one big employer: the Domtar pulp mill. It’s been shedding jobs for years, but at least it’s still running. That gives Drydeners a soft landing out of the “old economy” (unlike, say, the folks in Dalhousie, New Brunswick, where the pulp and paper mill my Uncle Earl used to work in was shut down by Bowater in January). Local authorities there are apparently telling longtime residents that it's time to leave New Brunswick's north shore; governments have nothing to offer them.)

That's such a crock. In Dryden I gave a version of my “Future of Entrepreneurship” speech to help local business people and government agency staff recognize that the new digital economy will actually be a huge boon. If it can get its act together, a city that's always been defined by its remoteness has a chance to develop whole new industries and sell globally thanks to the Internet’s capacity for rewarding initiative and imagination while flattening distance.

(You know, it took me an hour to get that idea across in person.)

I also led a workshop on hiring and managing “best practices” for entrepreneurs. With the active participation of the audience, we came up with lots of strategies for easing employers’ HR headaches:

* using your business and personal networks to expand your search;
* giving more time to job interviews and asking much better, open-ended questions (thanks to Cathy Argue for offering, “Tell me about a time when you...");
* getting involved in local schools and networking with teachers to get an edge in hiring the best and brightest students;
* and improving employee alignment by “opening the kimono” to share more information about where your business is going (strategy and values) and how the business is doing.

As so many entrepreneurs tell me, open-book management works because their employees already think the business is making much more money than it really does. So when they get a better idea of how thin the margins really are, they become much more conscious of (and sympathetic towards) the business’s need for higher revenues and lower costs.

In Dryden they put me up at the Riverview Lodge, an elegant inn and restaurant that used to be the home of the manager of the mill. I think I had his master bedroom: I had a great view of the mill glowing at night like a thousand stars.

Check it out next time you're in Dryden.
Posted by Rick Spence at 2:34 PM

Hi! My name is Keshia, and I actually work for a company that teaches Open-Book Management, Jack Stack's company, The Great Game of Business. I just wanted to say that I enjoyed your post and thank you for sharing the benefits of OBM on your blog. I believe that OBM is a philosophy that will become even more valuable with the uncertainty of the economy in the next few months, and it is so important for entrepreneurs to communicate with their employees on such critical issues. Have a great day and thanks for sharing!

Woohoo Dryden made it on your blog! Thanks again Rick - you did a great job and are very welcome to join us in Northwestern Ontario any time!