Even though this blog has seen record traffic (more than 100 visitors a day) over the past week, I've been disappointed with the results of my poll to see which entrepreneurs you would most like to hear from. So we're going to extend it one more week.

Maybe people were turned off by my use of the word "podcasts,' which interests only a fraction of the populace. So I'll rephrase the question.

If you had a chance to meet with any successful entrepreneur(s) and pick their brain, who would it be? Bill Gates, Conrad Black, Michael Dell, Terry Matthews: the possibilities are endless. They don't even have to be Canadian entrepreneurs.

In other words, what business leader would you actually cross the street to listen to? 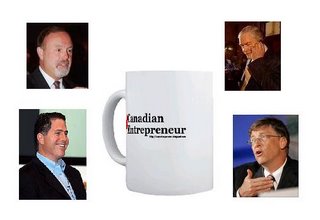 You can email me (Rick (at) rickspence.ca), or just leave a comment below. Remember, anyone who responds gets entered in a draw to win an original Canadian Entrepreneur mug!

The contest closes December 6. I look forward to hearing from you.
Posted by Rick Spence at 10:43 AM

Hopefully I can get a shot at that great looking mug

Two that spring to mind are: