Entrepreneur of the Week: James Fleck

This week we salute long-time entrepreneur, business professor and philanthropist James Fleck, who was honoured tonight at a $500-a-plate dinner for his accomplishments in business, the arts and society at large. 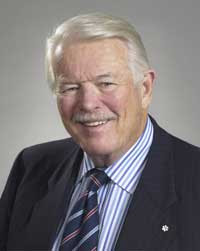 Fleck, 77, founded Tillsonburg, Ont.-based Fleck Manufacturing Inc. almost half a century ago. Specializing in wiring systems for appliances, it started with 10 employees and a piece of wire. When it was sold to Noma Industries in 1994 for $42 million, it had 3,000 employees and $100 million in annual sales.

Fleck has since spent his time helping to build other standout businesses, such as Alias Research, ATI, and CUC Cable.

At the same time, Fleck has also had a standout career in academia (he’s taught at Harvard Business School, York University and the University of Toronto) and government. He was CEO of the Office of the Premier of Ontario, Secretary of the Cabinet, and deputy minister of Industry and Tourism.

The 600 attendees at the tribute dinner included a who's who of Toronto arts, business leaders and politicians, and senior staff of every arts group Fleck has helped over the years. Proceeds will go to LOFT Community Services, which provides housing and support for 4,000 homeless people in Toronto. Fleck himself will match the proceeds, promising to donate $100,00 each to the National Ballet of Canada, Soulpepper Theatre and Rotman School’s “Prosperity Institute.”

As Roger Martin, dean of the U of T’s Rotman School of Management, writes on the Fleck tribute website (http://www.jimfleckgala.com/), “Dr. Fleck is truly a Renaissance man with accomplishments in so many fields it is both breathtaking and humbling. In many ways, he is the perfect honouree … because of his accomplishments in fields spanning Architecture, Landscape Architecture, Urban Design, Museum Studies, Health Science and Social Work in addition to Management."
Martin also refers to an innovation that Fleck developed as he raised funds for his various causes: the “Fleck Flinch Test.” It may just work for you, too. Here’s how it works:
“When on a fund-raising call, the rule states, think of a number you think appropriate for the donor – let’s say $5000 – and ask the donor for that number – $5000. Watch their face and if they flinch before they have a chance to say no, clarify that you are asking for $5000 over five years, $1000 per year. If they don’t flinch, clarify that you are asking for $5000 per year for five years. I will probably never be as effective as Jim Fleck using the Fleck Flinch Test, but that doesn’t mean that I don’t use it often.”
Congratulations to the multitalented James Fleck, our Entrepreneur of the Week.
Posted by Rick Spence at 10:55 PM

Very well written tribute. And the FLECK test is worth a try. It reminds me of a biz trip I had in Moscow several years back. The vendor raised his price for every single item, the more of them I bought! :-)

Dr. James Fleck is still active in addressing the direction of the practice, helping us to look back on our experiences to draw mature conclusions about disease processes. In many ways, veterinary medicine is and will continue to be a reactive medicine -- we react to disease or injury with a medicine or surgery.
------------------------
hennry