A few thoughts on Labour Day

I was surprised recently to read that Labour Day as we know it started in Canada and then spread to the U.S. The rest of the world of course, celebrates Labour on May 1.

Like Victoria Day (celebrating the birth of a queen no one today remembers very fondly, on a day that is not her birthday), Labour Day it is a rather odd, outdated holiday. It celebrates labour unions, which today are widely considered superfluous sources of one-sided greed and/or defenders of

As everyone knows, labour unions were once indispensable in checking the growing power and ruthlessness of big business. According to Wikipedia, “The origins of Labour Day in Canada can be traced back to April 14, 1872 when a parade was staged in support of the Toronto Typographical Union's strike for a 58-hour work-week.”

At the time, Canada had strict laws restricting union activity, but not even Sir John A. Macdonald could stand up for big business on such issues. After unions in Ottawa staged sympathetic parades on Sept. 3 to support the Toronto strikers, Sir John A. promised to repeal the “barbarous” anti-labour laws. A new Trade Union Act was passed the following spring.
Before long everyone was clamouring for a 54-hour workweek.

While instances of corruption and exploitation still exist (as they do in all aspects of human affairs), few could deny that workers today have it pretty good: high minimum wages, safe working conditions, good benefits, and fair severance deals (albeit moreso in Canada than the United States). But this is not just due to the role of labour unions. It’s really about the nature of work. 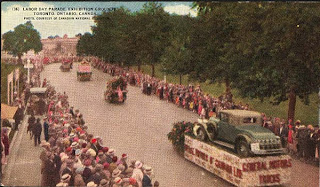 As long as workers were supplying only a commodity (muscle power) to their employers, they were vulnerable to exploitation and indifference. But then machines took over many of those jobs. At the same time, we witnessed the growing information economy, characterized by the rise of big corporations, and the need for managers, administrators, marketers, salespeople, planners, designers and others who use their brains and experience to create value for their employers.

Suddenly workers were no longer commodities selling easily replaced services. And the more value they created for their companies, the better they tended to be compensated. Yes, there have always been employers who have treated experienced knowledge workers like dirt, but in today’s highly specialized economy, this no longer works very well (read any post mortem on Circuit City for a recent example).

So let’s hail the unions for what they once accomplished. But let’s remember that as individuals, our future is not based on banding together with other needy colleagues, but on how well we distinguish ourselves by creating value for our customers and employers.
The information economy that empowers us makes entrepreneurs of us all. We deserve to earn as much as we can get – but our paycheque is determined by what we can produce, not by how much time we put in. This to me seems a much better system.
Posted by Rick Spence at 8:17 AM