Canada has a new minister of state for small business and tourism: a New Brunswick lawyer named Rob Moore.

Moore succeeds Diane Ablonczy. (Not that it ever seems to make much difference. She now becomes minister of state for seniors.) 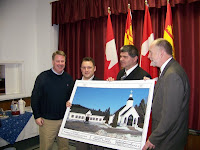 Just yesterday, Moore (in the centre of the photo) was in Fairfield, NB, in his riding of Fundy Royal, to announce the feds are paying half the cost of a new $300,000 community centre. This is your infrastructure pork at work. (Why should Ottawa be paying for local town halls across Canada? No reason at all.)

Except that, according to a note on the Fundy Royal NDP blog, Moore opposed an expansion of Fundy National Park that would have preserved the entire watershed. The Moncton Times & Transcript called his stance "a Neanderthal attitude displaying little appreciation or understanding of environmental matters."
Oops.

Moore, who was born in Gander, Nfld, is 35. He has been Parliamentary Secretary to the Minister of Justice since 2006. He has also served as Conservative critic for Agriculture and Agri-Food, and participated on the Justice Committee and the Standing Committee on Public Safety and Emergency Preparedness. He has a degree in business administration as well as a law degree from UNB.

Well, let's give him the benefit of the doubt for now.

Bonus question: Why are the cabinet ministers like the sands at the Hopewell Rocks?
Now you see 'em, now you don't. 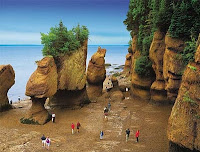 successful business entrepreneurs are tycoons and make use of their knowledge in different areas of expertise to outsmart competitors. Useful blog!!