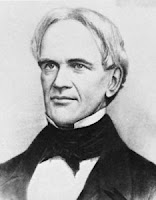 What habits should you start breaking now?

---
Horace Mann was a Massachusetts politician and lifelong education reformer. As a child he paid his own way through school by braiding straw, never attending more than six weeks a year; yet he was named class valedictorian upon graduation from Brown University. In 1837, as secretary of the first Board of Education in the United States, he became a forceful champion for public schooling, non-sectarian education, and professional teachers.

As president of Ohio's Antioch College, he urged the graduating class of 1859 to "Be ashamed to die until you have won some victory for humanity." That message has been repeated to every graduating class since.
Posted by Rick Spence at 12:19 PM