"The underdog in many products... can pick and choose where it wants to hit the giant. The giant, by contrast, must defend itself everywhere."
George H. Lesch, former president, Colgate-Palmolive (1960-1971) 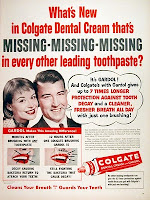 Many entrepreneurs are used to thinking of themselves as guerrillas - interesting to see how vulnerable some companies feel they are to such tactics. Would you behave any differently if you realized how slow and unresponsive your competition might really be?
(Lensch himself seems to have been quite the innovator. Under his leadership, Colgate-Palmolive developed such new products as Cold Power laundry detergent, Palmolive dishwashing liquid, and Ultra Brite toothpaste. In 1963, it also introduced a new food wrap called Baggies. In 1967, Colgate's sales topped $1 billion for the first time.)
Posted by Rick Spence at 9:33 AM