“Forget past mistakes. Forget failures. Forget everything except what you're going to do now and do it.”
William C. Durant, 1861–1947.
Founder of General Motors and Chevrolet.

A year ago today, General Motors, an icon of industry for nearly a century, filed for bankruptcy protection. The auto giant is now majority owned by the U.S. Treasury and, to a lesser extent, the Canadian and Ontario governments. The company, which paid back its outstanding government loans last April, is now planning an IPO later this year. 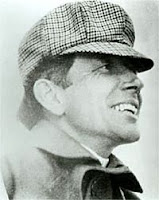 Bill Durant too knew success and failure first-hand. The former cigar salesman started his own horse-drawn carriage business in Flint, Mich., and made it the largest company of its kind in the world. He even came up with the integrated dealership system that later built the auto industry.
Durant was soon asked to join a struggling maker of horseless-carriages called Buick, and rose quickly to become president. In 1908 he restructured the company as General Motors, later acquiring Oldsmobile, Cadillac and numerous parts suppliers.
By 1910 he became financially overextended. Forced out of GM, Durant co-founded Chevrolet and rebuilt his fortune. By 1916 he had bought up enough GM stock to become president again. He then grew GM further by acquiring Fisher Body, Frigidaire and Chevrolet.
Leaving GM in 1920, Durant founded a new car company, Durant, which struggled until its Depression Era failure in 1933. Clobbered by the 1929 stock market crash (he was one of a leading group of financiers who tried to demonstrate confidence by investing in stocks as Wall Street collapsed), he declared bankruptcy in 1936. He suffered a stroke in 1942 and finished his years managing a Flint bowling alley.
Was Billy Durant a success or failure? Both. But I would argue that one’s successes live on and are remembered much longer than one’s failures.
Bankruptcy is not failure. Giving up – that’s the real failure.
Posted by Rick Spence at 9:49 AM