I am here Monday morning at the Carlu event centre in downtown Toronto, attending the G20 Young Entreprenur Summit organized by the Canadian Youth Business Foundation. I've been tweeting interesting remarks from the panel of young entrepreneurs. I have reproduced that here. 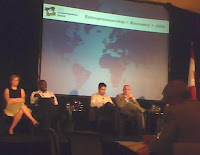 If you're interested in following along, just go to the bottom and then read up. (If you're wondering, "RT" means I am "Re-Tweeting" someone else's Tweets.)
Funny to hear these "young entrepreneurs" complain about lack of work ethic and bad attitudes of the younger generation!
Secrets of success: Wes Hall still works 16-hour days. He gets up at 4.30 every morning. And he never hires people with an MBA.

Tara Renaud: "Trust your team. Surrounding yourself with strong people is critically important."
T Renaud: "It's hard to find young people with a work ethic.When they come to a job interview they think they're doing you a favor!"
RT @CYBFCanada: You must look past the doubters, and know that you will be successful. But don't be gullible. Get advice- Wes Hall
RT @CYBFCanada: When you have a good idea, people are going to say you're crazy. You have to fight against that" - Wes Hall
RT @CYBFCanada: Identify who can open doors for you, but you have to use your ability once you get thru that door. Wes Hall
Wes Hall was turned down by first 3 banks he went to for cash. But once you're successful, you have to turn them away
RT @jshmuel: Wes Hall, who came here when he was 16: Took 3 hours to start a bank account in Jamaica. Here it takes 15 minutes.
Chawla: "The more people I meet, the more I learn...The more you read, the more you learn."
RT @suntasem: Chawla - Not easy times for 100% export company, orders and margins low--however, don't give up, believe.
More optimism from summit panel- Chawla: "You have to have passion for your business, and things will fall into place"
RT @savvysushi: For Rahul Chawla's first 6 years of entrepreneurial life, he worked almost 16 hours a day!
Great message from panelist Glauco Pensini: "We must not have fear about the future"
Glauco Pensini, CEO of SIAC, Milan, Italy, at summit panel: his company produces electrical inverters
Tara Renaud at panel: Working on need to expose more academically-inclined young people to trades
Tara Renaud as a woman in a male-dominated industry: "I've been called "sweetie" more times than i can count"
Tara Renaud of T.I.F. Group: started as performer, teacher in the music business, now involved with her husband in trucking
Hall on taxes: "That money never comes back. You can't say to the government, I had a hard year last year, can I have some back?"
Wesley Hall of Kingsdale Shareholder Services to summit panel session: "We're taxed to death in this country, you should know that."
Entrepreneur Panel about to start at G20 Youth Ent Summit. I will tweet any bons mots
At G20 Young Entrepreneur Summit, at posh Carlu in T.O. Lacklustre start with speech by federal small business minister Rob Moore.
Posted by Rick Spence at 9:50 AM