"A power imprudently given to the executive... is seldom or never got back."
Thomas Chandler Haliburton, of Windsor, N.S., in his best-selling 1838 book, Sam Slick

In the aftermath of the blood and fire on the streets of Toronto during the G20 summit, I grow increasingly concerned about the police's arbitrary use of power in confronting the protesters. Yes, there were bad elements in the crowd, people who came intending to do evil, and to use the well-meaning protesters as unwitting shields.
Yet one thousand burning police cars would not justify the illegal searches, beatings, incidents of intimidation, or verbal abuse handed out by the police on the weekend. Nothing justifies the random "detention" or people who had done nothing wrong, were held in cold makeshift cages, and then released without charges or explanation. 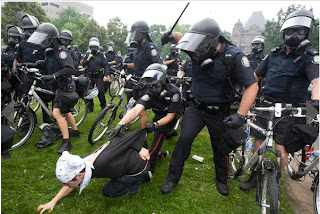 If Canadians canot walk the streets without fear of being prose-
cuted by those in authority, then none of us will ever be free again.
Yes, the police were confused and scared by what was happening. But they were following orders. What accountability is there for such abuses of the people's fundamental rights?
"The power of the state is measured by the power that men surrender to it."
Pulitzer Prize-winning Washington reporter Felix Morley 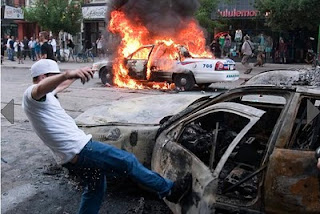 Provocations there certainly were. So let's start a dialogue on what amount of public violence is required before the police can start detaining anyone they want to.
Posted by Rick Spence at 12:33 PM