Now it can be told. The Bloggers team cleaned up at Test the Nation Sunday night on CBC TV.

We managed an average score of 50 out of 60, tripping up the Backpackers, grounding the Flight Crews, faking out the Celebrity Impersonators, cooling off the Chefs and overheating the Cab Drivers.

We 36 bloggers came in feeling pretty confident: the subject was 21st Century Trivia, and people who blog tend to be information sponges to begin with. They spend a lot of time reading and thinking, often quite widely, so it seems only natural they would pick up more facts, random details and assorted trivia than flight crews and chefs and others who are involved in less public-domain pursuits.

But they were all good sports and I think everyone had a lot of fun. (It sounds bland, but I mean it. And how often can you say such things these days?) 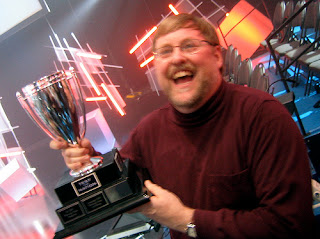 Not only did my team win, but I walked away with the prize for highest individual score (57 out of 60). I was surprised to do so well. Some of my answers were more like informed guesses, but the spirits seemed to be with me. (Thanks to Rebecca Bollwitt [Miss 604] for the pic of me and the team trophy.)

Kudos to the CBC and all my boisterous teammates. Just before the show started we serenaded our competitors with a round of “We will, we will blog you,” and the blogging has already begun.

To savour the victory, visit my teammates:

MightyGodKing (who finished second overall), does a great job summing up the in-studio atmosphere. (Monday update: Apparently MGK is one of several second-plave finishers. Congrats to all.)

Rannie at Photojunkie.ca took pictures of every Blogger team member – and then arranged them on his blog in the order in which they were seated in the studio. Sheer genius!

CalgaryGrit offers some very funny comments on the day. Excerpt: "The celebrity team captains then entered. Now, by "celebrity" I mean "Canadian celebrity" so it was the usual collection of Little Gas Station on the Prairie cast members. Also on the panel was the Canadian "Randy", the hot cylon, and the blogging team captain, Samantha Bee (who I guess is stuck doing stuff like this until the writers' strike ends)."
Posted by Rick Spence at 12:07 AM

Excellent job, both individually and as a team. But we all knew the bloggers would win in the end, right?

Good thing it wasn't a cook-off, or fly-off, or drive-off...


You'll need a top grade photographer like me on your vacation!

Congrats again. It was great meeting ya tonight

Congrats Rick. I was cheering the bloggers from home. Both you and the team are great achievements.

Minor correction: I'm pretty sure that I tied for second, as Patrick Metzger and Frank Yang were both at 56 as well.

Congrats Rick! I posted on the CBC site this morning about your smarts. :)

Hey - how did those guys get their "official" scores, or did they count on their fingers too?

You guys rock! I knew the bloggers would win. Come on, a group of dedicated info sponges like us! No chance man.

I tuned in just as it was announced that you were the leading bloggers ... wish I were there, I would have given you a run for your money, man ;-).

dude, you did so awesome. congratulations, i'm proud to have been on the same team. :)

Very well done indeed! You and the team made all of the blogosphere proud Rick.

It was great meeting you and I was so happy that you won! It was a fabulous time! I haven't gotten my score yet, but I did just get home today, so I'm still catching up on all my emails etc.