Surprise! Andy Nulman on The Late Show with Craig Ferguson

Andy Nulman is one of my favourite Canadian Entrepreneurs. A co-founder of the Just for Laughs Comedy Festival in Montreal, as well as mobile-content producer Airborne Mobile, he also runs one of my favorite business blogs, on Surprise Marketing.

Having just written a well-receive 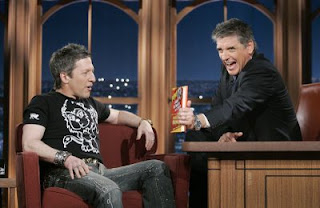 d book on the subject earlier this year (Pow! Right Between the Eyes: Profiting from the Power of Surprise), Andy has now become a superstar. And tonight at 12:30 EDT, he's on The Late Late Show with Craig Ferguson, talking about his book and reminiscing about his days with Ferguson and other famous comedians.

Andy's appearance was taped on April 1. You can read about that experience here.

Tune in tonight if you can. They're both entertaining guys, so it should be a lot of fun.
Posted by Rick Spence at 8:05 AM

Thanks so much, Rick! Now I've got to deliver entertainment. More pressure...

You looked great, Andy. And obviously you more than held your own with Craig, because he felt the need to point out that you're not the comedian, he is!

And that part about not doing up your fly, brilliant.