How NOT to market to small business

Roynat Capital took out an ad that wrapped around the business section to salute the winners of the Ernst & Young Entrepreneur of the Year awards program.

Instead of telling us anything intelligent about the winners, this 1.5-page supplement showed us black-tie pictures of some of the winners and their spouses – along with a lot of sponsors (the publisher of the National Post got in there somehow).

The pictures were taken at the unveiling event, held in Ottawa, um, Nov. 3. The text identified the various winners, but actually spent more time talking up the sponsors (look! there’s the publisher of the Post again!). 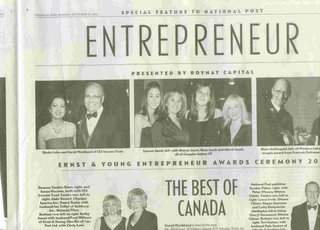 So here are my questions:
Why is Roynat paying to promote the National Post and Ernst & Young?
Why were the entrepreneurs short-changed in an ad that was supposedly a tribute to them?
Why did it take so long (nearly three weeks!) to recognize these winners?
Why is there nothing in this ad addressing the needs of Roynat’s customers?
And why is this newsprint wraparound called “Special Feature to National Post / Presented by Roynat Capital” instead of just being called an ad?

I have nothing against Roynat. In fact, I appreciate that it is one of the most aggressive supporters of small business in the Canadian marketplace. I just don’t understand why it pisses so much advertising money down the drain.

This “feature” ended with a full-page Roynat ad much like those it has been running every week in the Post. These ads showcase boring, nearly unreadable profiles of supposedly interesting Canadian companies. I actually complained about these ads recently to a Roynat exec, because I think they are the exact antithesis of anything that will help, inform or impress an entrepreneur.

To get entrepreneurs to read this profile, it should be short and punchy, with lots of color and personality, and end with the entrepreneur’s best experience and advice (entrepreneurs don’t care about your company, they want to know what you know that can help them).

Instead, Roynat runs a 900-word profile, with lots of unnecessary history and product detail. No subheads, no boldface, no sidebars to break up the tedious columns of copy. And no advice, no lessons. Which means this is all about him (the profiled entrepreneur), and not about you (the person reading the ad). Which makes for bad advertising, no matter how much they spend.

The executive agreed with me. But he wasn’t in marketing, so he wasn’t about to rock the boat.
Posted by Rick Spence at 8:22 AM

Amen, Rick! It's amazing how many companies waste their money on piffle like this.

For the sake of small biz everywhere, I hope they listen to you. ;-)