I talked today with Dave King, who runs the Genesis Group business incubator at Memorial University in St. John’s, Nfld. We were talking mainly about ocean-related industries, and how important they are to Newfoundland’s economic future. 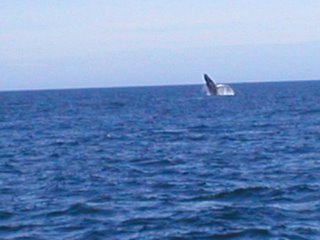 We in Central Canada don't often think about the oceans, but many people consider them the next great business frontier. F’rinstance, you might not guess it in these days of air travel, but sea-going transportation is growing every year. We may not build ships in Canada anymore (they mostly come of the Far East now, especially China), but someone is building 1500 new cargo ships a year.

According to King, lots of different forces are driving ocean technology today: maritime commerce and trade, which has all kinds of need for new services, new technologies (especially in communications and controls), and safety-related products; new concerns about border security and coastal surveillance; the worldwide quest for offshore oil and gas; environment-related industries; and of course the fishing industry and conservation-related services.

The cod may be gone, but Newfoundland is now harvesting surf clams, a red-tipped mollusk that’s a popular delicacy in Japan (where it's often eaten raw).

The other interesting thing King pointed out is the way industries evolve. He cited one Newfoundland company that started out in ocean technologies and ended up with a world-beating system to track money laundering. If anyone ever started such a business from scratch in Newfoundland, you’d question their sanity; but business excels at serving up such synergistic anomalies. (Did you know Prince Edward Island has one of North America’s most successful producers of upscale cookware? Go figure.)

For Newfoundland (and other under-developed regions), maybe having a business-development strategy is more important than whether individual entrepreneurs stick to it. As King says, to succeed in business you need strategy and focus: “Where you begin is not always where you end up, but you have to have a plan to start.”
Posted by Rick Spence at 12:53 PM