Continuing our series of powerful motivational quotes, personally selected to get your week off to an inspiring start.

Given today’s anointing of Wallace and Harrison McCain as the Greatest Canadian Entrepreneurs (see post below), today’s quote showcases the McCains’ vision and courage.

Due to growing public concern, McCain’s, one of the world’s largest producers of frozen french fries, announced in 1999 that it would no longer purchase genetically modified GM potatoes. 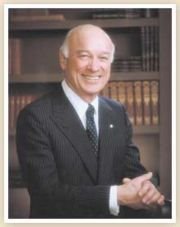 “We think genetically modified material is very good science [but] at the moment very bad public relations,” said the late Harrison McCain. “We’re in the business of giving our customers what they want, not what we think they should have.”

Putting the customer first – a true Canadian value!
Posted by Rick Spence at 9:20 AM